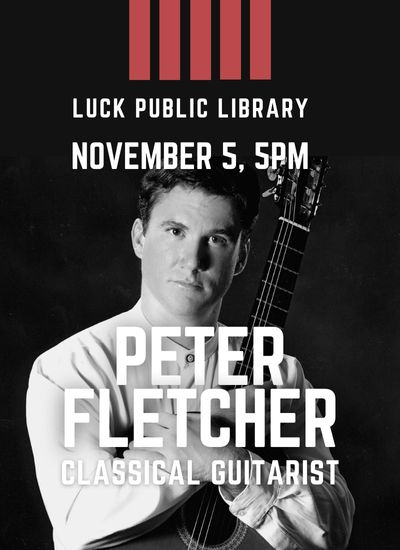 There will be a meet and greet for Peter at the Luck Library Friday evening from 5 pm to 7pm.  Come and chat with Peter and enjoy some refreshments.

Peter Fletcher began guitar study at the age of seven. In 1980 maestro José Tomás, Andrés Segovia’s teaching assistant in Spain, held a week long Master Class in Atlanta, GA. Peter Fletcher was the youngest student to perform in the class, playing music by Bach and Carcassi. In December, 1983, he made his formal debut under the auspices of The Brasstown Concert Association in North Carolina. Wrote the critic of The Cherokee Scout, “He has technical facility but what one remembers about his playing is the nuances, the poetical phrasing, dynamic and tonal changes, his harmonics, his cadences.”

Fletcher furthered his studies in Master Classes with David Leisner, David Russell, Oscar Ghiglia and Pepe Romero. As a performer in the Christopher Parkening Master Class in 1988, he was broadcast on National Public Radio (NPR). In 1990, the Music Teacher’s National Association (MTNA) awarded Fletcher a prize at its National Level Competition, and in 1995 he received the Master of Music degree from the Eastman School of Music under Nicholas Goluses, and was twice the recipient of an Eastman Graduate Award.

Peter divides his time between Detroit, where he recently purchased a vintage home in the historic North Rosedale Park neighborhood, and New York City.